Tony Corbett is a Cork-based composer, orchestrator and lyricist. He is equally at home with electronic, contemporary and orchestral music. Credits as a composer include ‘Con Saw Tina’ a short film written and directed by Stephen Murray (writer of ‘Situations Vacant’), ‘Blue Soup’ an internet serial and ‘Fun Science’ a pilot for a children’s general science program for RTÉ.

As a professional musical director, Tony has worked for various artists and productions, to great acclaim. He has worked with some of Irelands finest producers, singers and songwriters, such as Linda Martin (Eurovision Winner) and Karl Broderick (Eurovision Songwriter), as an arranger and a mix engineer. As an arranger, his greatest achievement to date was being asked to write concert arrangements for the musicals ‘Wicked’ and ‘Billy Elliot’ for a performance in the Gaiety Theatre Dublin.

For the past 8 years he has been the musical director for Anthem Productions, annually producing sell out shows to approximately 20,000 people every year and receiving rave reviews.     As a guitarist/pianist, Tony has toured the country with professional shows and performers such as “Les Miserables”, “A Slice of Saturday Night”, “42nd Street” , The Blues Brothers Showband, Boogie Nights, Dickie Rock (Famous Irish Showband singer), “Abbasalutely” and many more. He is also a member of a successful classical guitar duo called Syncopath. Since February, he has been on tour with the professional Irish production of “Rent” the musical, which finishes at the beginning of May.

Tony studied guitar and piano in both the Newpark School of Jazz and the Dublin Conservatory of Music and Drama and was highly commended in both. While at Newpark College, Tony also studied composition under Ronan Guilfoyle and graduated with distinction.  In 2007, he completed his bachelor’s degree in music, where he studied under the accomplished Irish composer Gráinne Mulvey. 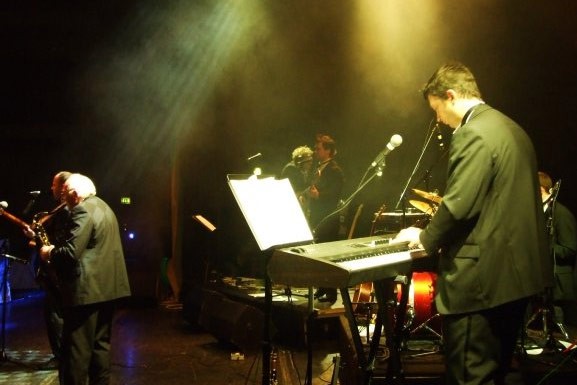 highest grade that year. Since then, he has completed two film scoring courses, with Berkelee College of Music online and Music for The Media.

Working in a fully equipped studio, Tony has experience in many software applications used for composition, sequencing and scoring. He has a vast store of ever expanding virtual instrument libraries, which he uses to create mock-ups of compositions for projects. This studio is also used for live recording and mastering. Through this, he has gained valuable insight into all genres and standards of music. With a varied career, in most fields of music, Tony is a well-rounded composer and musician.

Some of Tony’s Past Exploits:

Whiskey In The Jar The Musical