In his 15-year Professional drumming career, Grant Nicholas has learned to become prepared for every eventuality. He has played in iconic surroundings, such as New York’s Radio City Music Hall, LA’s Pantages and Dublin’s Olympia & Gaiety Theaters and massive venues, including Auditorio Nacional in Mexico City & Aviva Stadium in Dublin. Grant has toured the world – from Alaska to the United Arab Emirates, performing with stage musicals and rock bands.

Ian, born in London, grant moved to ireland when he was fifteen. He first became hooked on drumming from listening to hard rock albums as a kid. “Guns n Roses’ Appetite for Destruction. Faith No More too,” he says. He studied piano at the Royal Irish Academy of Music. “My earliest memories are of tapping away at the drum stool and piano. I’d make the bass drum sound with my foot on the carpet, and the higher pitch of the snare drum on the stool. I was a frustrated drummer!” 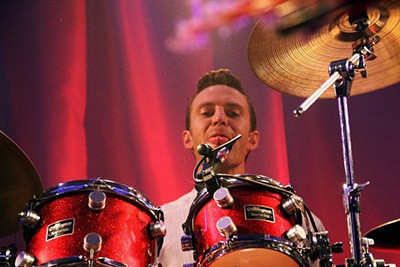 The real apprenticeship, he says, was with his original band Nanook, which was renamed the West Seventies in 1999. The band recorded singles, albums, toured Ireland, the UK, Europe and the United States. They also performed on BBC, RTE, radio stations across the globe, and continue to have their songs picked up for film soundtracks.

“All these years later, finally getting my music up on iTunes, knowing that it is written in stone, that it’s always going to be there, is great,” he says. “If my students need subject matter to focus on, I always refer them to the West Seventies stuff. Having your own original band from the start is a great apprenticeship: As good as any college degree. We were doing the music industry bloodbath, South by Southwest in Austin Texas and playing venues like CBGB’s in New York, and the 40Watt in Athens, Georgia. I’d recommend to anyone starting off, put your guitar in your bag, buy a bodhrán, and start touring and playing.”

Grant’s Past Exploits include: 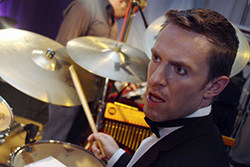